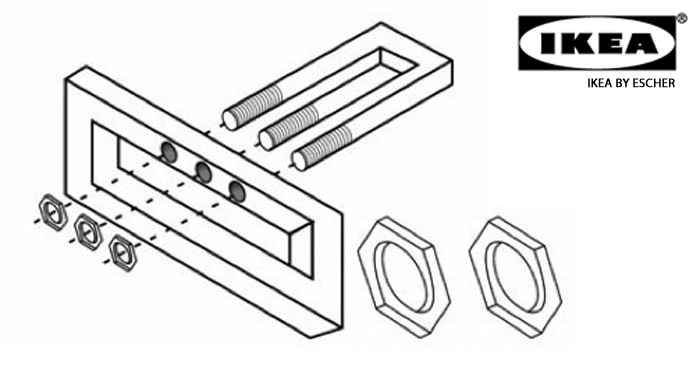 Would love to give credit for this image, but can’t find any…

If your brain is translating what you see in your assembly instructions to a version of the above image, then it’s time to quit while your ahead. Don’t even open up the hardware package, because you’ll be paying someone to re-itemize or find stuff that’s missing already.

Although instructions have gotten better over the years – at least in my experience, they can induce a mental fog with some people. Sometimes it takes a fair amount of interpretation, and in some cases they can be just plain wrong. A basket ball net assembly had me modifying the instructions before committing to drilling holes in the house, because they were off by several inches. That’s the kind of thing that can really mess you up unless you’re dealing with them all the time, or have the ability to think three dimensionally.

If you plan to hire someone to assemble, it’s better not to open the package. But if it’s too late, you tried and gave up – then  just know it will add time to the assembler’s job going back over what’s been done. I’ve assembled a lot of the same office desks for a customer who recently changed over to a new model. The old one took about 45-60 minutes, but the new one almost 2 hours. Keep in mind the number of parts can almost double between different models. That’s good to know if you suspect the assembly could cost more than the furniture.  Just unboxing can take 30 minutes. Also, almost everything I touch requires two people to carry, assemble or lift into position – and I do it all solo. You can just imagine all the different contraptions and methods I’ve developed to do this.